Down by the Railroad Tracks – Benson, AZ 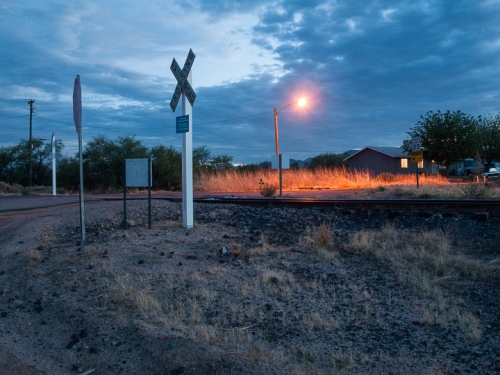 There’s something about going down to the railroad tracks that makes you never want to come back. It is a place between nowhere and everywhere you ever wanted to go. Very few Americans living outside the congested East Coast have ever actually traveled by rail, but perhaps because the country was built on rails, we feel the mechanics of the railroad in our souls. Maybe it’s the scale of the machinery, the earthy smell of the grease or the feeling that the whole damned thing is completely unstoppable that leaves us in awe, but being in the proximity of a train gives us a place to put our heart — even when we see the train simply passing us by.

Perhaps a quarter mile east of 4th Street in Benson Arizona — off a dirt road — you come to an uncontrolled railroad crossing. 4th Street is the main drag in Benson and passes by both Reb’s Diner and the Quarter Horse RV Park and Motel. Small hills poke up from behind the railroad tracks. Old ties, broken equipment and steel drums are pushed up against the fence.

These tracks are part of the San Pedro and Southwestern Railroad (SPSR) — an Arizona shortline railroad that is currently operating a connection between the main Union Pacific Railroad in Benson to a stop in Curtiss, Arizona. This makes up barely a ten mile stretch of track which is used primarily for transporting the chemicals needed by the mining industry and local fertilizer manufacturing facilities. Until recently, the line continued south to Bisbee and then east to a station outside of Douglas, AZ (home of the famous Gadsden Hotel).

In its heyday, railroads serviced not only mining and industrial needs in this area, but provided basic transportation for many. But in 2006, the SPSR shut down all services south of Curtiss and most of the track was ripped up shortly afterward. Some of the land was converted into a natural riparian conservation areas.

The sun was just setting as we parked our vehicle by the unlocked SPSR gate and entered its land. We looked down the tracks toward the main buildings. All were very small. The weather was beautiful, and if nothing else, it seemed like a nice place to take a walk. In the distance there was another couple walking along the tracks. It was hard to guess where they had come from or where they were going.

7 Comments to “Down by the Railroad Tracks – Benson, AZ”